The Medium is developed by Bloober Team, who came up with the idea in 2012.Bloober meant to enhance the immersion by changing their traditional perspective from first- to third-person and taking advantage of Xbox Series X/S’s background streaming.They modelled the supernatural setting after Zdzisław Beksiński’s dystopian surrealist artwork. Lead designer Wojciech Piejko said The Medium imparts the message that “there is no universal truth”. Composers Arkadiusz Reikowski and Akira Yamaoka were tasked with scoring the physical and spiritual plane, respectively.Using synthesiser and analogue sounds, Reikowski likened his approach to that of Stranger Things and Chernobyl.Yamaoka worked on the Silent Hill franchise, which inspired the game, including its fixed camera angles. He was persuaded to take on the music when Piejko gave him a gameplay demonstration.Singer Mary Elizabeth McGlynn, also of Silent Hill fame, will contribute vocals.Troy Baker voices the primary antagonist, known as the Maw, for whom another actor performed the motion capture on stilts. 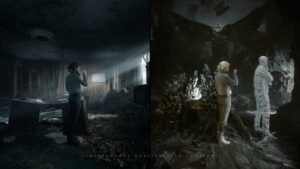 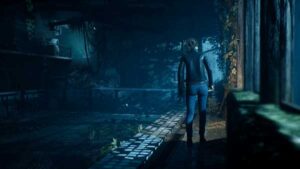